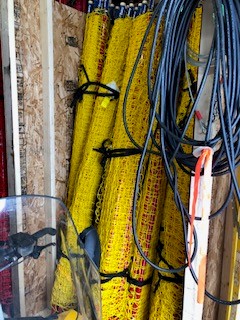 Smithers Ski and Snowboard club are the proud owners of 55 new Safety Nets thanks to a joint grant approach that came together over many months of effort this past year.

The Wetzin’kwa Community Forest Corporation Board approved a grant of $14759.85 to purchase 30 new safety B-nets for the Smithers Ski and Snowboard club.

This support was then applied to the Zoricic Foundation, who generously nearly matched the funds, resulting in a total of 55 new nets for the club!

This would have been an exciting moment for our club at any time, however with the cancellation of programming and our two largest events of the year due to COVID-19 it really was something special for all of us! We were waiting excitedly to have something positive to end the season.

We had intended for all the new nets to be out for our signature event, the Schussboomer Downhill on April 3 & 4. This is a fun team event that has a “race with in a race” for all us old racers! We also use it for a two day speed camp for all our athletes U12 and up. This was to be the 36th annual running of the downhill, the longest consecutive running downhill in North America. We’ve moved the date to December 12th, to keep it in 2020. We plan to run the 37th annual in 2021!

The nets would have also featured the following weekend at the largest BC Alpine Teck Race in our zone that has run the last weekend of skiing for decades. North Zone Finals features athletes from across northern BC and the Yukon and ends with a crowd favorite team dual event.

Sadly, we had to put the nets straight into storage.

They will make their debut on Hudson Bay Mountain on December 12th! We plan to move them from there to our main training run, Cinderella, as that is the most prominent and heavily used club run. We will keep them there for the 2020-21 season and beyond!

We sincerely appreciate the support of our club and of ski racing in northern BC. The Wetzin’kwa grant program is making an incredible positive difference locally, and Zoricic Foundation now has supported safety netting from Coast to Coast in Canada.